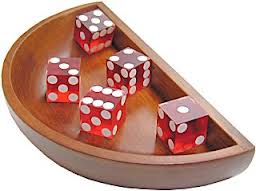 So we’ve covered where Craps came from. Next up – how the heck do you play the game? As an onlooker it looks ridiculously confusing, but really the game is easy as pie once you know the basics. And that’s exactly what we’re going to cover.

Craps is played in rounds where the shooter (a player) places his bet on the outcome of the round. Each player gets a turn to throw the dice and is called the shooter when it becomes his turn to throw. There are various bets one can take, the most basics being the Pass Line bet and the Don’t Pass bet (we will cover this in the module later), and the more advanced you get, the more bets there are that one can take (this will be discussed in a later module – hold your horses).

The Craps table can accommodate up to 20 players, and every person sitting at the table is given the chance to be the shooter. Should a player wish to pass up on his chance as shooter, he may do so and nominate another player in his place to throw the dice. The dice are the most important part of the game. The two die used are regularly inspected for damage and are usually replaced every 8 hours in the casino, because the whole game revolved around the accuracy of the throw.

When a shooter holds or throws the die, he may only use one partially open hand so that the dealer can see the dice at all times. This is to prevent cheating and swapping of the dice. When a player throws the dice, they must hit the back wall of the Craps table. They can first hit the felt and fall back on to the back wall, but at some point, they must touch the solid wall. Throw with confidence and control, but make sure you also don’t throw too hard. This is a sign of disrespect in the game.

The basic layout of the Craps Table:

Players will place their bets accordingly according to this layout. (We will discuss all the different bets later in this module and the next)

Who’s who at the Craps Table

Shooter: The game is centred around the shooter, who is a player. When the shooter rolls the dice, he will bet on which way the dice will land. He keeps shooting until he does not make his point (we will enlighten you as to what the point is later in the module) and when he does not make his point, he will pass the dice on to the person on his left.

Boxman: The boxman is responsible for the house’s money and he watched all the going-on’s at the table. He changes player’s chips to money, deals with any problems, and ensures the game runs smoothly. In other words, he is the supervisor.

Stickman: He takes care of the dice and moves them around the table with a flexible stick. At the beginning of every shooting round, he moves three pairs of dice to the relevant shooter, who picks a pair to use. He also announces the outcome of each throw.

Stickman: There are two dealers present at a Craps table, each one handling one side of the table. They pay out wining bets, collect losing bets and also make certain bets in the game.

You passed the second module and received an A+. Here is your badge: